As the hard-core C programmers know, the connect(2) function can operate in to modes:


One might believe the manuals and tutorials, which basically tell following:

To check the state of an asynchronous connection attempt, use getsockopt(2) to retreive the SO_ERROR value. If this is 0 (ESUCCESS), the connection has succeeded. If EINPROGRESS, the attempt has not been finished yet. Otherwise, the attempt has failed.

Problem: this is only true for Linux. On BSD (and yes, this includes OSX), when a connection is refused, getsockopt(2) will still return ESUCCESS. Even more strange, a write attempt to this socket simply makes the program exit - without a core dump.

According to this excellent summary, we are best off double-checking the state of the socket. The best option listed is issuing a getpeername(2) call, which either succeeds (connection established!) or fails (connection failed).

I expect my phone to run smooth and fast. I mean, it _has_ the hardware to do so! My old server has a Pentium III processor ticking at 1GHz, it has 512M RAM. I even used Eclipse + Tomcat to code a web application for my thesis program in java!

The Milestone 2 has similar specs. Okay, different architecture, but still, I expect it to be pretty fast. And since I installed Viber, it became unusable and slow, sometimes having to wait ~10 seconds just to see the dialpad appear!

Thanks to the guys at xda-developers.com, Jelly Bean, the shiny new operating system is available for the Milestone 2 as well, via the CyanogenMod custom ROM.

While very happy with the slick UI, all the new features of Jelly Bean, the phone continued to crawl after Viber got reinstalled. What now?
Fortunately, CyanogenMod has a great built-in option: you can change the CPU governor. If a CPU supports it, Linux can decrease the clock speed if there's no demand, to save battery. Go to System Settings => Performance => CPU Governor, and select "Performance". Also, tick the Set on boot option, to make this change permanent.
While the phone got much snappier, I did not notice considerably less battery time. I think this is due to the fact that when the screen is off (most of the time), the phone sleeps (ie, CPU speed has no effect), and when it's on, the CPU usage is high anyway - due to all the effects, etc.
Another tip: turn off background data (maybe enable it selectively for a handful of applications). This will save bandwidth and battery.
Update: recently I installed LINE, but I had to realize it drains my battery extremely fast. Switching back to "Ondemand" governor solved this issue.

In this case, "just" root the phone, and install an application that is able to set the CPU governor. (If you're a Linux guru, edit the boot scripts yourself from the terminal to issue "echo performance > /sys/devices/system/cpu/cpu0/cpufreq/scaling_governor" on every bootup.)
Posted by ritch at 8:51 AM No comments:

Just Another HOWTO on Subversion-to-Git Conversion

I found many blogs detailing how to do this -- each tailored for different circumstances, some working, some producing strange error messages. Here is the workflow I used -- bare in mind, my SVN repositories are _very_ simple, contain no branches, no tags, and only I committed to them.

This file is used to map SVN users to Git committers. The authors-transform.txt file should be plain text, containing lines like:

Note: the URL should not contain "trunk".

The git svn clone creates a bidirectional repository, ie you can commit your changes back to SVN, and also make further updates. This is not what we want here - we want to migrate away from SVN for good.

Push to a Remote Repository

This part is less related to the topic, just for reference. Assuming you have a different host storing repositories:

At work I used to have an AMD desktop with an Athlon 4450B dual-core processor and 3G mem. Not the most recent config, but should not be bad either.

Software being run:
The system was still dead slow, even with regular Firefox restarts (FF being the main memory hog).

I wanted change, and after trying and reading about LXDE and XFCE, I settled with WindowMaker as the least resource hungry desktop. I remember having used it - conveniently - on a 300MHz Pentium in the 90's (an old Linux intro I wrote in Hungarian is still available online and shows my old desktop). Why not give it a try again? Guess what, it works like a charm, it's fast, easy-to-use and to configure: 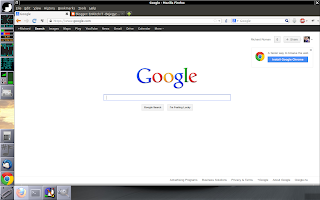 - use Google Chrome instead of Firefox
- PCManFM (part of LXDE)
- install WM
- in ~/GNUstep/Library/WindowMaker/autostart add:

Make sure to use the _() gettext function (WordPress: __(), _e(), and _x() functions) wherever translatable string literals are used, properly specifying the text domain as needed.
When using WordPress, make sure to call load_plugin_textdomain() from the 'init' action callback.
(Note that WordPress does not use the PHP gettext built-in functions, it has its own .mo file reader code in wp-includes/pomo directory.)

When the initial code is completed, a template ".pot" file needs to be created:

An empty .po file needs to be initialized before we can start translating. Assuming we are translating into German:

For some reason, msginit creates a "de.po" file by default.
"locale -a" command to list all the locales installed on your system.
msginit sets encoding to ASCII, needs to be updated.

Work can finally begin! Being a command-line and terminal enthusiast, I use VIm to edit the .po file; it has a great plugin helping in common tasks: po.vim.

When using WordPress, make sure to prepend the "domain" to the .mo file name, e.g. myplugin-de_DE.mo


When the Code Changes

I am a programmer. I like helping others. Back in 1999, the Linux Absolute Beginner's HOWTO I wrote (in Hungarian) even got published in GameStar.

There are many problems we find solutions for during the course of our life. It really helps to share the solution when found -- and a blog is the best place to do this.

If there is only one man finding relief here, creating it has already been worth it.
Posted by ritch at 3:49 PM No comments: